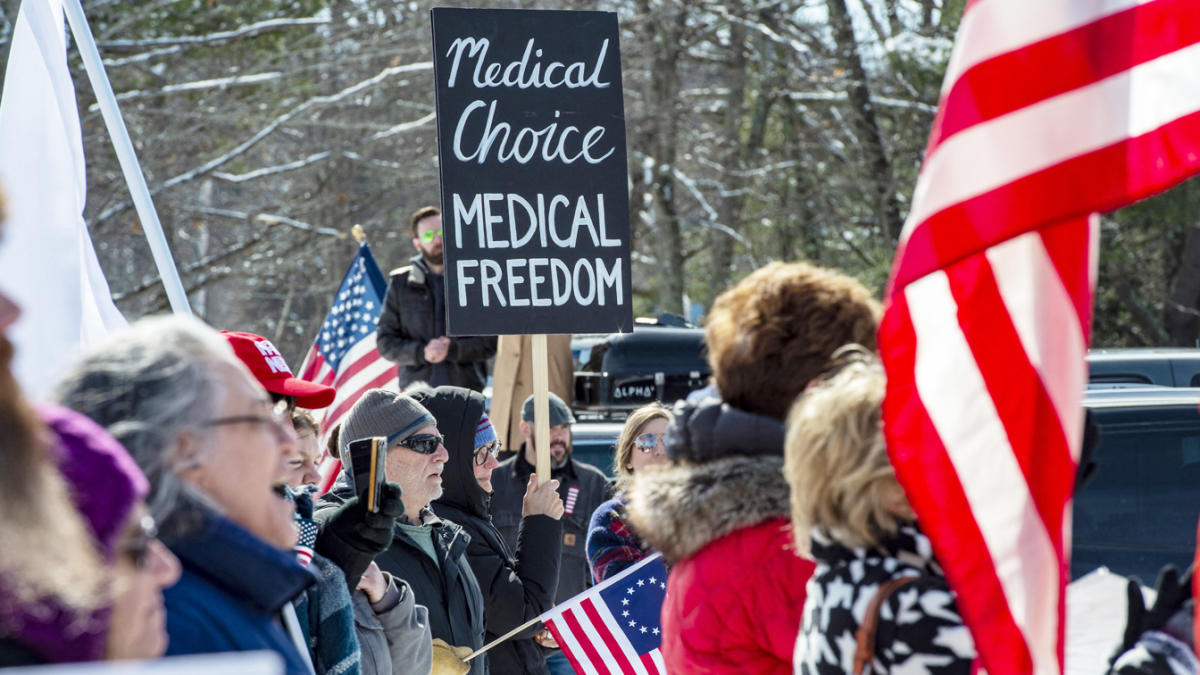 Two years into the pandemic, nearly half of U.S. residents (43%) say they feel “worse” about their “fellow Americans,” according to a new Yahoo News / YouGov poll. Just 10% say they feel “better.”

As Omicron recedes and now Americans seem eager to move on, it’s easy to lose sight of the staggering personal toll COVID-19 has taken. But the new survey shows that almost one in the United States has emerged unscathed.

And many Americans continue to face challenges even as case counts plummet and masks come off. Nearly 1 in 3 (29%), for instance, say they know someone who has had “long COVID” – defined as “a range of symptoms that last weeks or months” after the initial infection – and 6% say they have experienced long COVID themselves. Together, that’s the equivalent of 91 million Americans.

The political, social and psychological impact of the pandemic, meanwhile, has been just as extensive. Only 14% of Americans say they’re “better off” now than before the pandemic; more than twice as many (35%) say they’re “worse off.” Two years later, the numbers for how Americans feel about the federal government (44% worse, 16% better), their own state and local governments (34% worse, 17% better) and the Centers for Disease Control and Prevention (36% worse, 22% better) are similarly negative.

In one sense, these stats shouldn’t be surprising. To date, the U.S. has reported nearly 80 million COVID cases; more than 965,000 Americans have died of the disease. As the Atlantic’s Ed Yong recently reported, “US life expectancy fell by two years [in 2020 and 2021] – the largest such decline in almost a century.

“Every American who died of COVID left an average of nine close relatives bereaved,” Yong explained. “Roughly 9 million people – 3 percent of the population – now have a permanent hole in their world that was once filled by a parent, child, sibling, spouse, or grandparent.”

Couple that kind of incalculable loss with the political division that’s marked this pandemic almost since the beginning, and it’s clearly a recipe for deep and lasting ripple effects. Still, seeing them quantified is sobering.

As with everything in American life, partisanship plays a role here. Republicans in particular seem to have soured the now on public health and institutions, with more saying they have come to feel worse rather than better about the federal government (66% worse, 9% better), the CDC (52% worse, 18% better), public health officials (46% worse, 19% better), their own state and local governments (41% worse, 16% better) and even vaccines (40% worse, 19% better).

(This is despite the fact that COVID vaccines prevented about 1.1 million deaths and 10.3 million hospitalizations in the U.S. through the end of November 2021, according to estimates by the Commonwealth Fund.)

Democrats are the opposite: More say the pandemic has made them feel better rather than worse about vaccines (52% better, 8% worse), public health officials (46% better, 12% worse) and the CDC (37% better, 16 % worse). But they are far more likely than Republicans to say they feel worse about their “fellow Americans” (49%) than better (9%).

Yet partisanship is just one of many factors that have shaped Americans’ direct experience of the pandemic. Age is another. Older Americans report personal suffering and loss far more often than younger Americans, with nearly half of seniors (47%) saying they know someone who was hospitalized due to COVID (compared with just 22% of Americans under 30) – and more than a third of seniors (35%) saying they know someone who died of it (compared to just 15% of Americans under 30).

Going forward, Americans seem increasingly – and understandably – eager to put the pandemic behind them. Slightly less than half of Americans (49%) say they wore a mask “now of the time” or “always” during the last week, down from 62% in early February. Just 38% of parents report their school systems still require students to wear masks, down from 55% in mid-December.

Likewise, a 5% of Americans now select COVID-19 as their top priority for President Biden, and just 23% think the pandemic should be among Biden’s top three priorities, down 6 points from two weeks ago.

The reason for this is that a clear majority of Americans (55%) now believe the worst of the pandemic is “behind us,” while just 17% still believe the worst is “yet to come.” Even as waning immunity, the lifting of restrictions and the more transmissible Omicron subvariant known as BA.2 appear to be triggering another spike in cases across EuropeAmericans remain optimistic.

Only time will tell whether such rosy predictions prove correct. But experts say America should prepare for the worst even as it hopes for the best, warning that whatever versions of the virus come after Omicron won’t necessarily be “milder” – and that the US should capitalize on the current lull to fully fund the Biden administration’s plan to keep future variants from an upending society (which both Democrats and Republicans in Congress have refused to do).

“We need this money,” a senior administration official told reporters during a press call on Tuesday, pointing to creating shortfalls in the ability to manufacture and widely distribute tests, therapeutics and vaccines. “Time is not on our side. We need this funding immediately. ”

Either way, many Americans seem to have accepted that they will be dealing with COVID for the foreseeable future – and that they can live with the risks. In fact, 39% now believe they are “very” or “somewhat” likely to be infected someday, up from 33% a year ago. But while 60% said they were worried about the virus then, just 47% say the same today.

The Yahoo News survey was conducted by YouGov using a nationally representative sample of 1,623 US adults interviewed online from March 10 to 14, 2022. This sample was weighted according to gender, age, race and education based on the American Community Survey, conducted by the US Bureau of the Census, as well as 2020 presidential vote (or nonvote) and voter registration status. Respondents were selected from YouGov’s opt-in panel to be a representative of all US adults. The margin of error is approximately 2.7%.

What Is Monkeypox? – The New York Times