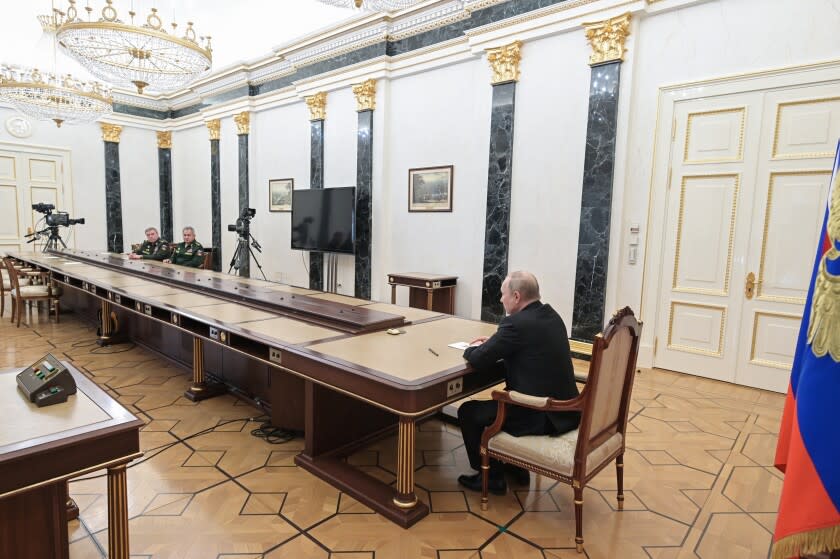 It wasn’t the first time.

“If anyone decides to meddle [in Ukraine] and create unacceptable strategic threats for Russia, they must know our response will be lightning-quick, ”Putin said Wednesday. “We have all the tools for this… and we will use them if we have to.”

“The risk is serious, real. It should not be underestimated, ”Lavrov said. “Under no circumstances should a third World War be allowed to happen.”

Nuclear saber-rattling is an unattractive habit, and Putin and his aides resort to it often. In 2008, they warned Poland that it would risk annihilation if it joined a US-sponsored missile-defense program. (The Poles joined anyway.) In 2014, they warned that an attempt to push Russia out of Crimea, which they had grabbed from Ukraine, could trigger a nuclear response.

And in February, as he launched his invasion of Ukraine, Putin ordered his unhappy-looking defense minister to raise Russia’s nuclear forces to “strategic combat readiness.”

The elaborate threat appeared intended to frighten the United States and its European allies away from the war. Once again, the threat didn’t work.

US officials said they didn’t take Putin’s threat literally, perhaps because they had heard it before. CIA Director William Burns dismissed it as “rhetorical posturing,” noting that Russia had not visibly readied its nuclear forces.

There is one form of nuclear warfare, however, that Burns and others consider a more imminent threat: tactical nuclear weapons, relatively small warheads designed mainly to be used on a battlefield, not to level an entire city.

“Given the potential desperation of President Putin and the Russian leadership, given the setbacks that they’ve faced so far militarily, none of us can take lightly the threat posed by a potential resort to tactical nuclear weapons or low-yield nuclear weapons,” Burns said last month.

Russia has more than 2,000 battlefield nuclear weapons, and their use is a routine part of Moscow’s war planning and military training.

The devices are small only in comparison with the missile-borne warheads that Russia and the United States have aimed at each other since the Cold War.

Many “low-yield” nukes are almost as powerful as the bomb in the United States dropped in 1945 on the Japanese city of Hiroshima, killing at least 70,000. Some are larger.

The scenario US officials and outside experts worry now about is this:

If Putin faces a humiliating defeat in Ukraine, he might order the use of tactical nuclear weapons against military units or cities to try to shock the Ukrainians into surrendering.

Even if a “low-yield” detonation did not compel Ukraine to surrender, it would break a globally observed taboo on nuclear warfighting that has held, almost miraculously, since 1945.

So President Biden has issued a warning to Putin in return – but it has been deliberately quieter than the Russian threats.

“With respect to any use of weapons of mass destruction – nuclear, chemical, biological – Russia would pay a severe price,” national security adviser Jake Sullivan said in March.

One diplomat told me he believes Biden has asked Chinese leader Xi Jinping, Putin’s most important global ally, to send the same message.

Stanford nuclear scholar Scott Sagan has suggested another step – private warnings to Russian military leaders that they would be held responsible for war crimes if they used tactical nuclear weapons against civilian targets.

“The United States has a long history of hunting down war criminals,” he told me. “Russian generals may be reluctant to cross the nuclear threshold … and the United States should reinforce that reluctance by adding very personal reasons for restraint.”

What happens if deterrence fails?

Harvard strategist Graham Allison posed a difficult version of the question last month: If Russia detonated a nuclear warhead, then challenged Ukrainian President Volodymyr Zelensky “to agree to a cease-fire or wait to see what a Ukrainian Nagasaki looks like, what would the United States and NATO do? ”

Just as in the bad old days of the Cold War, we are being forced to think the unthinkable.

Part of the answer may be counterintuitive: If Russia uses nuclear weapons, the United States need not – and should not – respond in kind.

US nuclear retaliation could launch a tit-for-tat cycle of escalation and lead to a global holocaust.

And it wouldn’t be necessary. The United States and its allies have conventional weapons that could destroy Russia’s ability to continue the war in Ukraine.

“The response to a tactical nuclear weapon doesn’t have to be nuclear,” Sagan said. “There are lots of conventional responses that would be very harmful to the Russian military. … The Russian base where their nuclear attack originated could be suddenly destroyed, or many Russian warships could be suddenly difficult. ”

Even after a Russian nuclear strike, in other words, Ukraine and its allies could still pursue their goals – to turn back the Russian invasion, secure Ukraine’s sovereignty and give Putin a black eye.

With luck, those hard questions won’t need to be confronted.

But if Putin is backed into a corner – even though it will be a product of his own brutal mistakes – he’ll be even more dangerous than he is today.

That’s the warning he’s been sending all along.

Australia’s Election: What to Watch