ZMIIV, Ukraine – The wind carried the smell of death across the street. The body of the dead man, burned, mutilated and barely recognizable, was taken from the refrigerator and laid on a metal gurney. The coroner smoked a cigarette and unzipped the black bag.

It was a beautiful spring day. There had been no shelling that morning. And Oksana Pokhodenko, 34, gasped, blinking, at the charred corpse. That was not her brother, she told herself, that was not Oleksandr. That was barely human.

Her brother lived once. The family patriarch for 20 years since their father died, he called his sister every day after the war started as he fled with his family to a village, Husarivka, wedged between rolling wheat fields. He kept calling – “Hello, Little One. We’re good. How are you? ” – but never mentioned that the Russians had overrun the village where he was hiding.

Ms. Pokhodenko, in black jeans, a black jacket and barely laced sneakers, struggled to keep looking at the body. Her brother had taught her how to ride a bike and had loved to watch cartoons for hours with his son. To his sister, he was a “stone wall.” This was a charred husk. Half of the man’s skull was gone, and his chest cavity was splayed open.

This was Ms. Pokhodenko’s task on Tuesday morning, to identify the unidentifiable, to reconcile the unreconcilable, to put a name on a blackened corpse, to fill out the paperwork and to move on. A war so big that it has shaken the world was suddenly just a body bag holding the remnants of a man.

The coroner was tired. He was 51, had been on the job for 25 years and, for security reasons, would give only his first name, Vitaliy. Since the war began in February, more than 50 bodies had come through the door, civilians along with Ukrainian soldiers, mangled by rocket blasts and tank shells and gunshots, arriving from different fronts in eastern Ukraine, whether near the city of Izium or near city ​​of Chuhuiv.

He was accustomed to the horror, to how the war shredded a body beyond recognition. Others were not.

“Take a sip of water,” Vitaliy told Ms. Pokhodenko before she entered the room with the body. “Did you take masks with you? Here, have some, wear a double layer. Just in case. ”

The masks were not for Covid.

Ms. Pokhodenko had traveled that morning from her home in the well-tended suburbs of Kharkiv, the country’s second largest city, now a regular target of Russian bombardments. The coroner had arranged for her to pick him up, and after stopping to buy cigarettes, he guided her to the morgue.

“All of the scariest things are before me,” Ms. Pokhodenko said, standing in front of the morgue’s swinging wooden doors before walking inside. The building, a single-story brick relic built sometime before World War II, was surrounded by weeds and stray dogs. Rain from days earlier had left puddles in its yard where earthworms had risen and floundered.

She had reason to be fearful. Her brother had not called since March 14. She had last seen him on Feb. 23, the day before the Russians invaded.

They had sat in his secondhand sedan in a parking lot outside where she worked, quickly catching up and handing over bills they needed to pay for their aging mother. He asked to grab coffee, but she declined. She had to get back to her job.

“If I knew that was the last time I was going to see him,” Ms. Pokhodenko said, her hair pulled back in a pony tail and eyes swollen from crying, “I would never let him go.”

Oleksandr Pokhodenko, 43, drove delivery trucks for a supermarket chain and lived in the Saltivka neighborhood of Kharkiv. Russian forces began shelling the neighborhood from the opening hours of the war, and Mr. Pokhodenko, his wife and their 3-year-old son fled to a small town to the east. When the Russians occupied that town, the family fled again, this time to Husarivka, a village of about 1,060 people.

In early March, the Russians occupied Husarivka and the Ukrainians counterattacked, shelling the enclave incessantly. A village that nearly no one had ever heard of, that had once seemed sleepily apart from the world, was now a theater of war.

On March 15, Mr. Pokhodenko and Mykola Pysariv, 57, a distant relative in Husarivka who had taken the family in, set out at around 3 pm to retrieve some potatoes for the eight people now living in Mr. Pysariv’s basement. Russian soldiers had given assurances that they could carry out the errand unmolested.

Mr. Pysariv was a construction worker who had served in the Soviet military in the 1980s. His wife went to the morgue on Tuesday, too. She said that she had last seen him as he was walking out the door to collect the potatoes, and remembered that Mr. Pokhodenko had stopped him just as he was about to leave. “Uncle Kolya,” he had said, “let me come with you.”

The two men set out into the winter cold and never returned.

When Ukrainian soldiers retook Husarivka at the end of March, residents emerged from their basements with horror stories. Five men had disappeared after going to feed cows at a farm that the Russians were using as a headquarters. Then, on April 22, Ukrainian soldiers found two bodies that they believed were those of Mr. Pokhodenko and Mr. Pysariv, whose throat had been slit. Soon after, the corpses were delivered to the morgue in Zmiiv.

Inside the morgue, Vitaliy, the coroner, invited Ms. Pokhodenko and her partner, who had also driven over with her, into his cramped office piled with books and scrap paper, a painting of an old ship hanging behind his desk. He pulled out a passport and explained why the two bodies now likely were once her brother and Mr. Pysariv.

“The smaller man died of a gunshot wound to the left side of his chest,” Vitaliy said, referring to Mr. Pokhodenko. “Here is the passport; it has been shot through. ”

The coroner showed it to Ms. Pokhodenko.

The passport’s edges were burned, but it was still legible. At the top of the book, through Oleksandr Pokhodenko’s portrait, his hair tightly cropped and face stern, was a bullet hole. After Mr. Pokhodenko was shot, the coroner said, his corpse was doused in fuel, covered with tires and set aflame.

Ms. Pokhodenko composed herself and walked out into the yard, into the warm sun, sobbing after looking at her brother’s body.

It wasn’t him, she said. There was no way. The same height, maybe, “but there wasn’t even a skull.”

Ms. Pokhodenko’s partner asked to examine the corpse’s mouth. The teeth looked like Mr. Pokhodenko’s, he insisted, so, after much debate, the coroner placed his hands in the remains and pulled out the part of the skull with the top row of teeth attached.

Vitaliy didn’t need to use a saw because the body’s joints were no longer tight – the bone came out easily. He set it on a metal gurney outside the morgue, away from the rotting corpse.

Hours passed. Ms. Pokhodenko gave her statement to the police. But it would take another night for her to accept that her brother was no longer missing, but dead, lying in a middle-of-nowhere morgue, the casualty of a brutal war that had just begun.

Her acceptance that it was Oleksandr came down to height, foot size and how the corpse’s front teeth slanted at a particular and familiar angle. She would await the results of a DNA test, but, for now, it was enough.

Her thoughts turned to burying him, to the funeral to come, and to moving him away from the horrors of the morgue.

“I don’t want my brother to lie there for a month,” she said before he was buried Thursday. “It’s so cold in that room.” 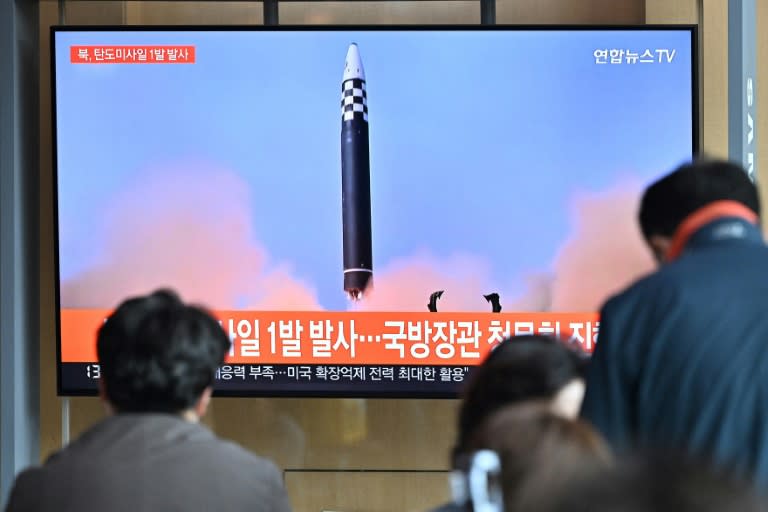 North Korea ‘ready for nuclear test’ with Biden due in Seoul

Iran executes more people than almost any other nation. A pop star is trying to change that