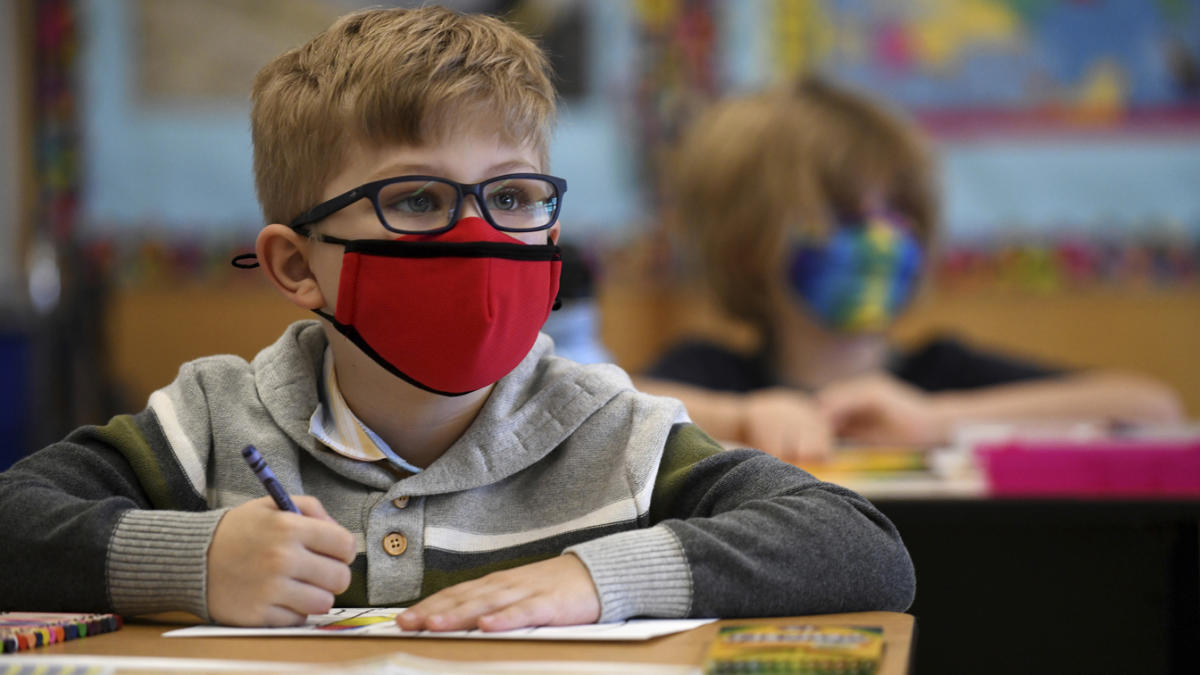 WASHINGTON – In recent days, a social media image showing a page from a second-grade yearbook at an Oregon public school in which students are masked has led to outrage from those who say children don’t need to wear face coverings in the classroom.

“What we’re doing to kids in this country is horrific,” Missy Crane wrote in an article on the website of conservative radio host Wayne Dupree. “I have watched as these neurotic, crazy adults push their own psychosis all over their kids.”

A user on Twitter reposted the photo and took aim at Dr. Anthony Fauci, President Biden’s top medical adviser and a favorite target of right-wing rage. “He needs to pay for his crimes,” she wrote in reference to the photo.

Yet the image says at least as much about masking policies as it does about how lies and deceptions spread – and how difficult they can be to identify, leading to what researchers have described as a “pandemic of disinformation.”

Somehow lost in the flurry of outrage is the fact that the photo in question is nearly a year out of date. “This year photos were taken outdoors without masks with the assistance of our contracted photographer,” Jen McCulley, a community engagement director for Springfield Public Schools, in which the school in question is located, told Yahoo News in an email.

She added that Springfield “was the largest district to safely return to in-person instruction last spring,” at a time when many Democratic states and municipalities struggled to move away from remote learning.

So does the tweet constitute misinformation for leaving out crucial context? Or is that context beside the point, since children in Oregon and many other states continue to wear masks in schools? Yahoo News spoke to several experts in misinformation, asking them to reflect on the Oregon tweet as either a valid volley in the coronavirus culture wars or a deceptive effort to sway the narrative.

Those experts widely disagreed, hinting at just how difficult it is for institutions – including media outlets and social media networks – to police content that could be misleading or outright incorrect.

“Is this photo misinformation? It’s in the eye of the beholder, ”Tim Weninger, a professor of engineering at the University of Notre Dame who studies social media, told Yahoo News in an email. “In general, a big part of disinformation is presenting an image out of context. For example, talking about Russian military updates near Ukraine while showing bloody pictures from the Crimean war from a few years ago. ”

A recent poll by the Kaiser Family Foundation found that at least 78 percent of Americans have fallen subject to misinformation to some degree. The music streaming service Spotify has come under criticism this month for not doing more to curb the unscientific and potentially harmful views voiced on Joe Rogan’s popular podcast. On Sunday, Spotify said it would add warnings to programs about the pandemic.

Rogan was among those who helped popularize Libs of TikTok, the Twitter account that blasted out the image to its 500,000 followers on Jan. 23, as the culture wars over masks in schools appeared to be heating up once more, with even some Democrats calling for children to finally shed their coverings, now that the Omicron surge seems to be subsiding.

“2nd grade yearbook in an elementary school in Oregon. This is so sad, ” a social media message posted by the group stated. Missing was any context other than a follow-up tweet seeming to acknowledge that Ben Edtl, an anti-lockdown activist who runs an organization called Free Oregon, was the original source for the image.

Libs of TikTok is run by an anonymous woman who did not respond to a request for comment for this article. But in an interview – her first – with Fox News in December, she said that exposing teachers was a primary goal. “It’s such an honor, and a little bit of a responsibility, I feel, I owe it to our kids – to show everyone what these teachers are doing,” she said. “And when there’s actually action taken – so, meaning a teacher gets fired or suspended – it’s a really great feeling.”

Thousands of people have responded to the image of masked second graders with outrage, exasperation and dismay. “This is just another example of how insane liberals and those that buy into the narrative truly are,” went to an article about the yearbook on the DC Patriot, a right-wing site dedicated to the work of conspiracy theorist Matt Couch. “What in the world is the purpose of yearbook pictures if you can’t see your child’s face? These people have truly lost their damn minds. ”

The image appeared to materialize at the perfect moment, just as many progressives were coming around to the idea that masking children in schools may no longer be necessary. The photo confirmed those concerns, even if it did so under inaccurate pretenses. Arguably, however, the fact that children in Oregon continue to wear masks renders the lack of context irrelevant.

Michigan State misinformation expert Anjana Susarla disagrees. “This tweet does seem like a case of misinformation since it is not supported by the current facts,” she told Yahoo News in an email. But she added that messages like this one were bound to only reinforce already deeply held opinions.

“In general, Twitter may be more polarized when it comes to pro-mask and anti-mask discourse,” Susarla wrote. “I think these types of tweets end up getting visibility mostly within their own echo chamber.” The same could be said of messages that equate a reluctance to wear masks with reactionary politics.

No single group has a monopoly on misinformation. Anti-vaccine sentiment has long been festered in the wellness community, even before the arrival of the coronavirus. And some progressive outlets continue to say that in-person schools are unsafe even though countless scientific studies and experts indicate otherwise.

Many of the same digital tools that let millions work from home or see distant relatives during the pandemic have also contributed to a politicized climate that has flummoxed public officials unsure of how to counter false and conspiratorial insinuations.

“The general population has, in good faith, taken the information, including fake news, now relevant to their own personal situation and has used it to formulate their own interpretation of the pandemic,” Italian researchers wrote in August 2020 in a paper about the corrosive effect that misinformation was having in the global pandemic response.

In the end, the difficulty of defining misinformation may simply speak to the fractured nature of reality in 2022, with almost any statement by a public figure subject to scrutiny from those who simply subscribe to a different set of truths.

“People might mistakenly believe the picture is from this year,” Dartmouth professor Brendan Nyhan, an expert on conspiracy theories, told Yahoo News in a text message. “Knowing that it is from last year is relevant to the context. On the other hand, some people may still find it sad regardless of the year it was taken. ”

Indeed, the Libs of TikTok tweet appeared perfectly timed to exploit the growing division over masking in schools. In that narrow respect, the tweet was a resounding success.