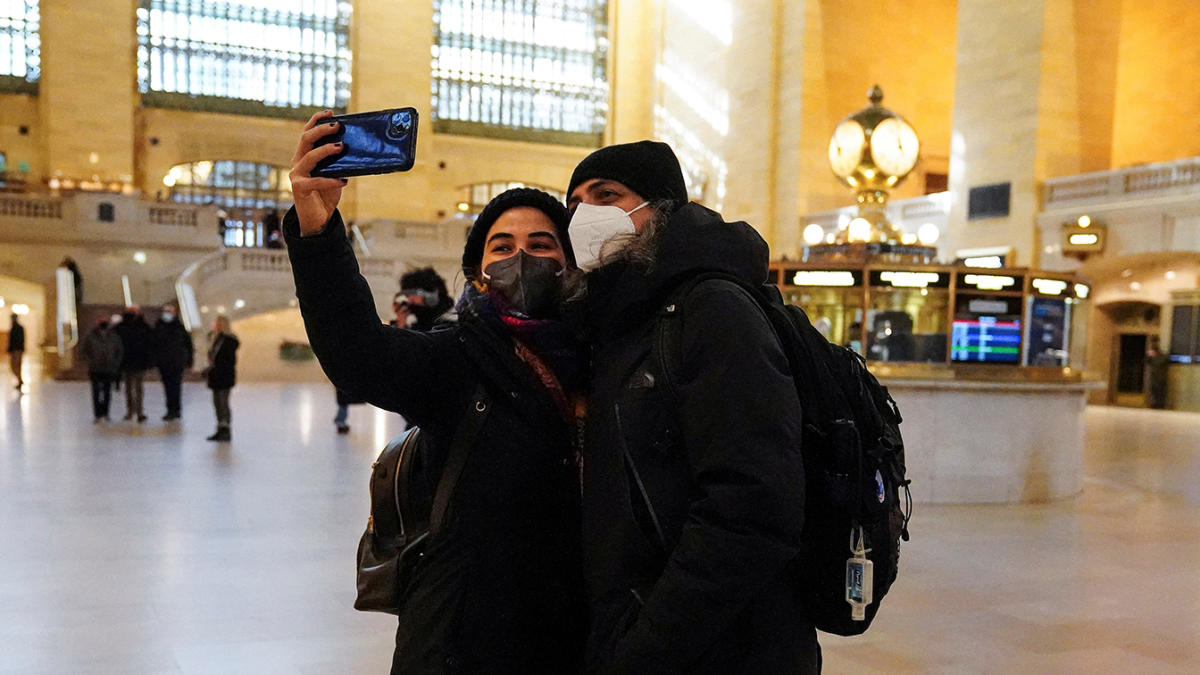 Are Americans “done with COVID,” as the journalist Bari Weiss said she was on last week’s “Real Time With Bill Maher,” triggering a frenzy of commentary and controversy?

The short answer is: not yet. According to the latest Yahoo News / YouGov poll, nearly 7 in 10 Americans (69 percent) say the pandemic is not “over in the US,” and just a third (34 percent) say it’s “over as it pertains to [their] own life, ”regardless of whether it’s“ over for others. ” The fast-moving Omicron variant is still causing 500,000 cases and 2,500 deaths a day; more than 140,000 COVID patients are currently hospitalized.

The longer answer, however, is that a broader embrace of pre-pandemic normalcy could be right around the corner.

While many Republicans who remain disproportionately unvaccinated, say they’ve been “done with COVID” for a while, and while a small contingent on the far left say they can never imagine a return to normal, a third group – the fully vaccinated, who lean liberal – say they’re increasingly ready for emergency mode to end.

The survey of 1,568 US adults, which was conducted from Jan. 20 to Jan. 24, found that a full third of vaccinated Americans (37 percent) now say that COVID is “more of an inconvenience” than a “health concern” for them, while fewer than half (49 percent) say the opposite.

Likewise, even though most vaccinated Americans (55 percent) still want to “do more to vaccinate, wear masks and test,” nearly 4 in 10 (37 percent) now insist that “we need to learn to live with COVID-19 and get back to normal. “

As a result of this emerging divide among vaccinated Americans – who have long supported COVID mitigation measures by substantial margins – more Americans overall (46 percent) now say we need to learn to live with the virus and get back to normal than say we need to do more to control it (43 percent).

The same dynamic is also starting to shape expectations of what comes next.

Asked when the US should “consider the pandemic over,” for instance, nearly half of vaccinated Americans (a combined 48 percent) either say “it’s over already” (13 percent) or that it could effectively be over soon – that is, when the “current Omicron wave subsides” (6 percent) or when “the risk of COVID-19 to Americans is on par with seasonal flu” (29 percent).

Many experts expect COVID to become a flulike threat in the coming weeks or months, as baseline immunity through vaccination and infection continues to grow and as antiviral pills that reduce the risk of hospitalization or death for the unvaccinated by 88 percent become more widely available.

Meanwhile, fewer vaccinated Americans (38 percent) say the US should consider the pandemic over only “when global vaccination rates are high enough to stop dangerous new variants from emerging,” a more distant goal.

“We are not there yet,” Dr. Anthony Fauci, the nation’s top infectious disease expert, told the New York Times on Monday. But “do we have indications that we might be heading there? The indication is yes. ” Already, “the combination of the vaccines’ effectiveness and the Omicron variant’s relative mildness means that COVID now appears to present less danger than a normal flu ”to people who are vaccinated, according to the Times’s David Leonhardt -“ even among people 65 and older . ”

Make no mistake: Democrats in particular – 90 percent of whom say they’ve received at least one vaccine shot – are still taking COVID very seriously. A full 69 percent say the pandemic is not over for them, personally; three-quarters (75 percent) say “we need to do more to vaccinate, wear masks and test.”

Republicans, unsurprisingly, are the opposite: Nearly 6 in 10 (59 percent) say the pandemic is over for them, personally, and more (65 percent) say “the COVID-19 rules” are a “bigger problem in America today” than “The COVID-19 virus.”

Yet even among Democrats, a significant minority thinks the virus has become more of an inconvenience than a health concern (29 percent) and believes we ultimately “cannot control” it (23 percent). The plurality of independents (46 percent and 42 percent, respectively) agree.

As a result, Americans overall are now split on whether COVID-19 is more of a health concern (39 percent) or more of an inconvenience (41 percent), and fewer than half (44 percent) feel it is a force that “we have the power to control. ”

So while 59 percent of Americans remain at least somewhat worried about COVID-19; while 61 percent say they wore a mask outside their home always or now of the time in the last week; and while a nearly identical number think the worst of the US pandemic is still to come (27 percent) or remain unsure (33 percent), such vigilance could begin to wane if no worse variant emerges after the Omicron wave recedes.

In part, that’s because just as many Americans continue to say the vaccines are performing the same as or better than expected (62 percent) and doing a “good” or “excellent” job at “protecting people from hospitalizations and death” (57 percent ) despite breakthrough infections – assessments supported by the science.

In part, it’s because fewer vaccinated Americans say they’re worried about COVID hurting their own health (60 percent) than say they’re worried about COVID “hurting others’ health” (71 percent), “overwhelming the hospital system” (72 percent) percent) or “disrupting [their] own life, even if [they] don’t get sick ”(64 percent) – suggesting that they may be ready to transition out of emergency mode as plummeting Omicron case counts start to drastically reduce the risk of this kind of ripple effect.

And in part it’s because now Americans say they’re not willing to alter their lives indefinitely for COVID.

The only thing a majority of Americans would be willing to do once COVID becomes endemic? The bare minimum – that is, “isolate if infected” themselves (57 percent).

In short, Americans – including Americans who have been cautious up until now – will be “done with COVID” someday. The question is how soon that day will come.

The Yahoo News survey was conducted by YouGov using a nationally representative sample of 1,568 US adults interviewed online from Jan. 20 to 24, 2022. This sample was weighted according to gender, age, race and education based on the American Community Survey, conducted by the U.S. Bureau of the Census, as well as 2020 presidential vote (or nonvote) and voter registration status. Respondents were selected from YouGov’s opt-in panel to be a representative of all US adults. The margin of error is approximately 2.8 percent.