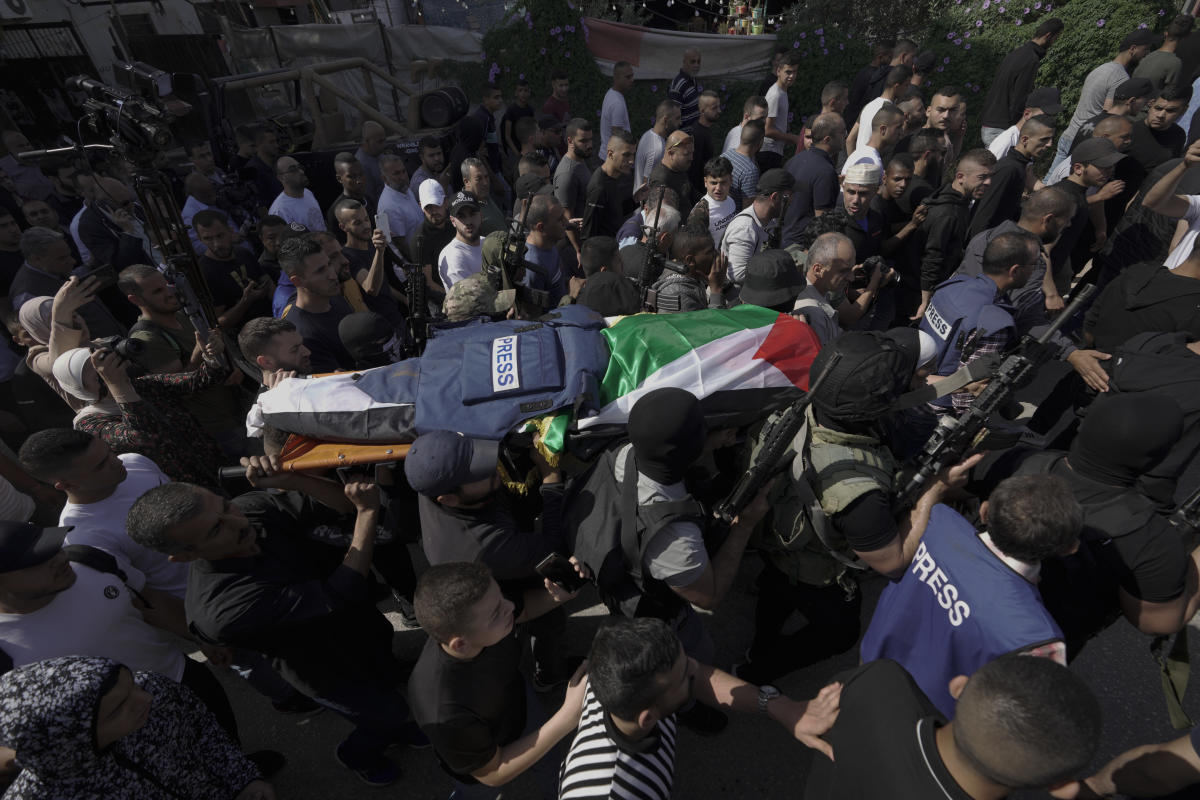 RAMALLAH, West Bank (AP) – Thousands gathered to mourn a slain Al Jazeera journalist in the occupied West Bank city of Ramallah on Thursday, as the head of the Palestinian Authority blamed Israel for her death and rejected Israeli calls for a joint investigation.

Shireen Abu Akleh, a Palestinian-American reporter who covered the Mideast conflict for more than 25 years, was shot dead Wednesday during an Israeli military raid in the West Bank town of Jenin. Journalists who were with her, including one who was shot and wounded, said Israeli forces fired upon them even though they were clearly identifiable as reporters.

Israel says it is investigating the incident. It was initially suggested she might have been shot by Palestinian militants, without providing evidence, but has since backtracked. Israel is calling for a joint investigation with the Palestinian Authority, which administers parts of the West Bank and cooperates with it on security.

“They cannot hide the truth with this crime,” Abbas said in an address as her body lay in the state with a Palestinian flag draped over it in the West Bank city of Ramallah, where the Palestinian Authority is headquartered.

“They are the ones who committed the crime, and because we don’t trust them, we will immediately go to the International Criminal Court,” Abbas said. The ICC launched an investigation into possible Israeli war crimes over a year ago.

Hussein al-Sheikh, a senior aide to Abbas, said that the Palestinians would conduct their own independent probe and convey the results “with high transparency.” He rejected an Israeli request to conduct its own ballistic analysis on the bullet.

Abu Akleh was killed while covering an Israeli military raid in Jenin, which has emerged as a militant bastion in recent weeks as Palestinians have carried out a series of deadly attacks and Israel has launched military raids across the occupied West Bank.

The Qatar-based Al Jazeera accused Israel of deliberately killing her and vowed to take legal action. Reporters who were with her said there were no Palestinian militants in the area.

Israeli officials initially suggested Abu Akleh was struck by militant fire and released a video showing gunmen firing at Israeli forces in a narrow alley inside the Jenin refugee camp. They later backtracked after an Israeli human rights group released its own video showing the site of the shooting was several hundred meters away from where Abu Akleh was killed.

Her death was met with an outpouring of grief across the Arab world. The 51-year-old was well-known as a veteran on-air correspondent for Al Jazeera’s Arabic-language channel. Her reporting shed light on the harsh realities of Israeli military rule, which is well into its sixth decade with no end in sight. She was also a US citizen.

Her body was to be brought to Jerusalem, where she was born, for burial on Friday.

The killing sparked international condemnation and widespread calls for accountability. UN Secretary General Antonio Gutteres called for an “independent and transparent investigation” to ensure those responsible are held to account.

Israeli Defense Minister Benny Gantz on Wednesday promised such an inquiry, saying he was in touch with US and Palestinian officials and hoped for cooperation between Israel and the Palestinians.

“We’re trying to figure out exactly what happened,” he said. “I don’t have final conclusions.”

Abu Akleh’s death could draw new scrutiny of Israel’s military justice system, which is being examined as part of the ICC probe. It also threatened to further strain often rocky relations between the army and the international media.

Rights groups say Israel rarely follows through on investigations of deadly encounters with Palestinians, and that when it does, it often hands down lenient punishments.

Her death comes amid a wave of Israeli-Palestinian violence that has been fueled by tensions at a key Jerusalem holy site.

At least 18 people have been killed in Palestinian attacks in recent weeks, as well as more than 30 Palestinians, now of them involved in attacks or clashes with Israeli forces. Among the slain Palestinians were an unarmed woman and at least two apparent passersby, feeding criticism that Israel often uses excessive force.

Aristide Demanded French Pay Reparations to Haiti. He Ended Up in Exile.

Australia’s Election: What to Watch