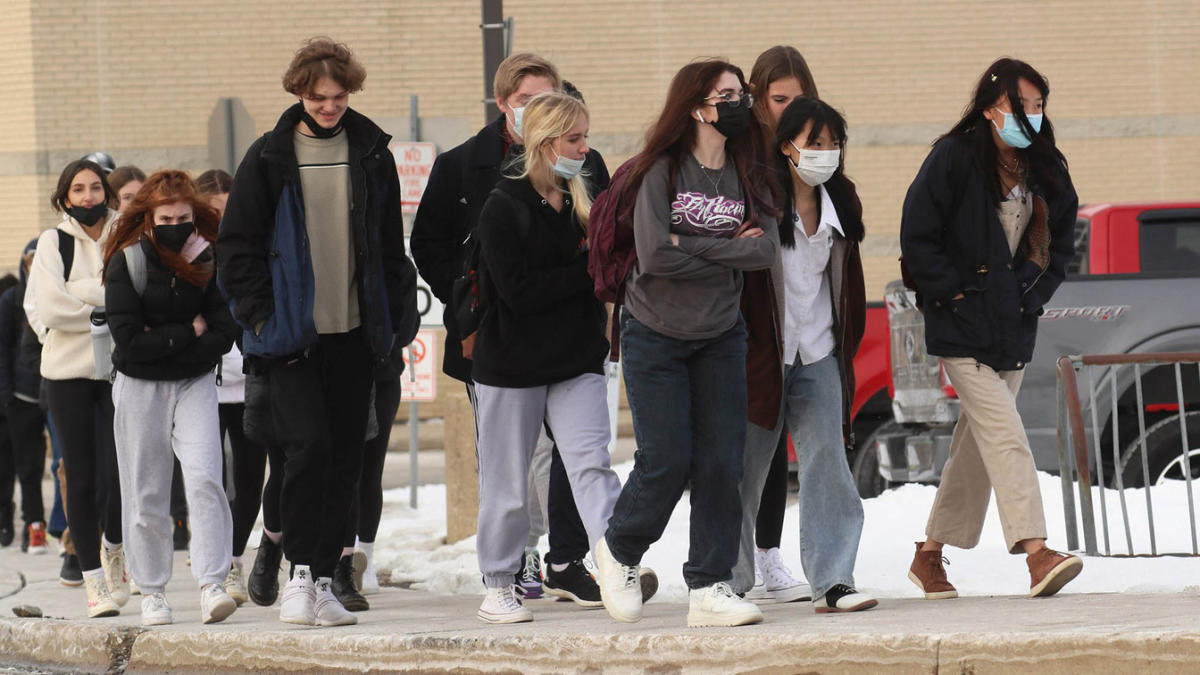 WASHINGTON – New Jersey became the latest state to lift school mask mandates on Monday, as Democrats continue to struggle over how to keep schools open, adhere to scientific guidance and allay a base that remains in favor of a cautious approach to the pandemic.

A warning of how confounding the issue of masking children remains came a few days prior, as Georgia governor candidate and national Democratic star Stacey Abrams visited the Glennwood Elementary School in an Atlanta suburb on Friday to celebrate Black History Month. Afterward, she retweeted an image of herself sitting with students on a classroom floor and commented that the visit had been “delightful.”

But the image struck some as hypocritical, since Abrams was not masked while the students around her were. That was in contravention of the mask mandate in DeKalb County, which includes Atlanta and its surrounding, had reimposed as the Omicron surge took hold earlier this winter.

The controversy that followed was surely motivated by politics, by Republicans in both Georgia and Washington criticizing Abrams and other Democrats for not following the scientific guidance they had so readily touted (Abrams eventually deleted the tweet). But it was also evidence that raw divisions over schooling remain, even as the source of many of those divisions – remote schooling – has been resolved in many ways.

Schools are as fully open as they have been in months; according to the data analysis firm Burbio, which tracks school closures, last week saw only 539 schools disrupt their learning (either by moving to remote instruction or closing altogether) because of coronavirus infections. By contrast, the second week of January saw 7,462 disruptions, leading to dismay among advocates who had pushed for a full reopening last fall.

Only weeks ago, Chicago teachers were on the verge of a strike and thousands of schools were closed across the country. Largely, those closures had to do with infection rates, not labor disputes, but tensions continued, with some Democrats beginning to worry that the issue could damage their electoral prospects in November.

Since then, schools have reopened for in-person instruction – across the nation, schools have been more uniformly open this week than any other period since November. But during that same time, the acrimony over reopening has simply migrated to the issue of children wearing masks in school, presenting a new challenge to Democrats for whom education is emerging as a potential political weakness.

A few Democratic governors have lifted statewide orders on masking students, with New Jersey becoming the latest to do. Gov. Phil Murphy called the decision a “huge step toward normalcy” in an interview with The New York Times ahead of Monday’s announcement. Ned Lamont of Connecticut is also moving that direction. Gov. Tom Wolf of Pennsylvania has been there for some time.

Lifting a state mandate does not prevent local school districts from imposing their own rules, but it no longer gives them a governorate cover to do so. Some Republican executives have taken the opposite measures, making it illegal for districts to impose mask rules on everyone.

According to Burbio, 60.4 percent of the nation’s 500 largest school districts still require masking, a notable but not massive drop from the 73.8 percent that required masks in October. Back then, the Delta wave was sweeping over the United States. Some schools have not been open since early 2020, and masking seeds like a relatively small price to pay for more Zoom in 2021.

But since then, the calculations have sharply changed.

Evidence continues to suggest that wearing masks does control the spread of the coronavirus, although some have disputed those findings. Yet there is also growing worry that masks also hinder development in some children who belong to an overall category that is least likely to experience severe COVID-19 symptoms. Importantly, vaccines have become widely available for children, adding another layer of defense against the virus.

Plus, as Murphy pointed out to the Times, the arrival of warmer weather will allow for windows to be opened.

Some parents and educational policy advocates worry that masks could inadvertently become part of schooling, and that if mandates are not nullified now, they may never be. The critics’ augment, simply, is: If not now, when?

The moment does present a complex political puzzle, in addition to the public health issues that seem to arise with each new day. Democrats have generally favored pandemic restriction measures like mask mandates, but as the pandemic wears on, the opposition to requiring masks for children appears to be growing – or at the very least getting louder.

“An urgent return to normal school, without mandatory masking, is critical for our kids’ health and wellbeing, ”several physicians urged in a recent op-ed in USA Today.

Republicans have relished juxtaposing images of unmasked politicians like Abrams with those of children wearing masks in classrooms. While that comparison is inexact, it points to the political divisions the GOP believes are to its inherent advantage.

A reminder of how perilous the issue could be for Democrats can be found in Virginia, where former finance executive Glenn Younkin won the governorship last year in large part by harnessing suburban discontent with remote learning and other education issues, like the teaching of critical race theory . Across the country, such districts, full of moderate voters, will prove crucial to both parties’ prospects in next November’s elections.

Youngkin lifted his Democratic predecessor’s school mask mandate on his first day in office, setting up a fight with Democratic strongholds in Northern Virginia – and with the White House itself. Several school districts are suing the governor for forbidding them from implementing mandates, even though parents there are highly divided on the issue.

Nowhere were those divisions more apparent than in Loudoun County, Va., Where anger over masks combined with a debate over how to teach American history, as well as an alleged sexual assault that conservatives tied to a policy regarding transgender students. Youngkin seized on these various schooling issues throughout his campaign.

The county’s now-notorious school board meets on Tuesday.

What Is Monkeypox? – The New York Times