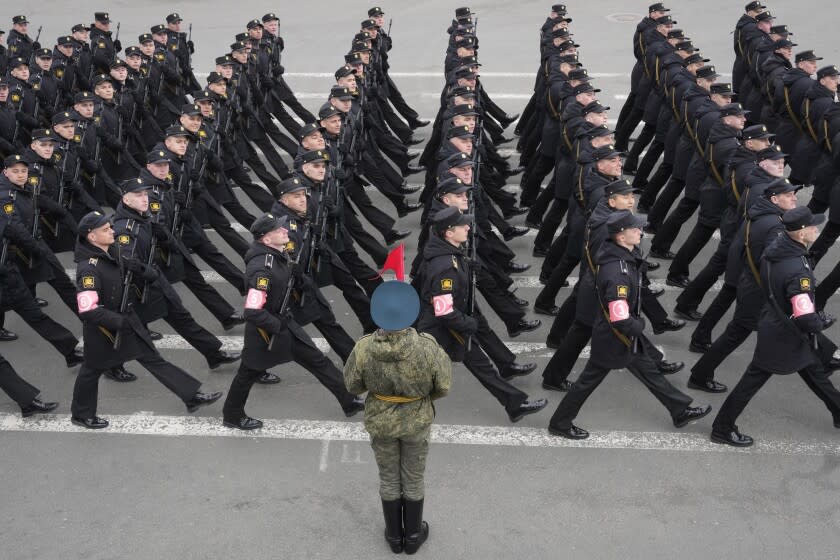 That’s a question Russian President Vladimir Putin will have to answer, at least implicitly, when his country marks one of its biggest and most bombastic patriotic holidays, Victory Day, on Monday – a highly choreographed celebration of Moscow’s military might that awkwardly coincides this year with a smaller neighbor’s improbable defiance in the face of a withering 10-week assault.

“There’s no victory to announce,” said Mark Galeotti, a Russia expert at University College London. “So he’ll have to proclaim one all the more loudly.”

The war on Ukraine – the “special military operation,” as the Kremlin dubbed its Feb. 24 invasion – can in no way be said to have gone according to plan. Putin’s armies have killed thousands, flattened once-vibrant cities, sent more than 5.7 million people fleeing into exile and inflicted billions of dollars in damage to Ukraine, a country of 44 million people that became a sovereign nation more than three decades ago when the Soviet Union imploded.

But in these weeks of warfare, Putin’s once-vaunted military has failed to seize Ukraine’s capital, Kyiv, or depose its government. Russia has also suffered the ignominious sinking of a flagship missile cruiser and suffered military casualties likely exceeding those of the Soviets’ signature debacle in Afghanistan in the 1980s.

The invasion of Ukraine has re-energized the NATO alliance, pummeled the Russian economy and plunged the country’s 144 million citizens into a degree of isolation not seen since the chilliest days of the Cold War.

Russia, which encountered little meaningful resistance when it seized Ukraine’s Crimean peninsula in 2014 and fomented a separatist war in Ukraine’s east, had by all accounts hoped for a swift victory and speedy installation of a puppet government when its troops and tanks rolled across the borders.

Instead, Ukrainian President Volodymyr Zelensky has achieved near-Churchillian stature as a wartime leader, and Western dignitaries arrive near-daily in Kyiv, lavishing cash, weapons and expressions of support on Zelensky’s government.

Yet this is seen by many as a particularly perilous juncture of the war, as Ukraine and its allies wonder whether Putin, livid over a triumph that has eluded him, will lash out in ways not yet seen in this conflict.

Monday’s holiday marks the 77th anniversary of the Soviet victory over Nazi Germany, a day of deep emotional resonance for Russians who still recall a staggering death toll of 27 million compatriots in World War II.

On Moscow’s Red Square, Putin, 69, is due to preside over a cavalcade of troops and tanks, rockets and long-range ballistic missiles. Military flyovers will reportedly include a pointed display – the first in more than a decade – of Russia’s airborne “doomsday” command center, a plan meant to carry senior leaders and military officials in the event of a nuclear exchange.

On a day whose overt theme is glorious victory, however, the Ukraine war offers “very, very slim pickings,” said James Nixey, who heads the Russia-Eurasia program at Chatham House, a British think tank.

Putin, he said, “will need to spin a narrative, they will need to say, proclaim something, show they’ve achieved something, and there’s a limited menu from which to do so.”

In recent weeks, Ukrainian and Western analysts and officials have gamed out various Victory Day scenarios: Moscow seeking to engineer a decisive battlefield blow in Ukraine’s east, mounting punishing strikes on cities far from the front lines, or formally annexing more territory under only the shakiest of Russian control.

Other possibilities: a formal declaration of war by Russia, accompanied by a mass troop mobilization, or nuclear saber-rattling even more worrisome than that of recent weeks. Or a Russian push into Moldova, a small, impoverished non-NATO state that borders Ukraine.

In the eyes of many Ukrainians, Putin’s main claim to battlefield success in Ukraine is a Pyrrhic one: the expected final capture of Mariupol, the now-devastated southern port where some of Russia’s worst atrocities are said to have taken place.

Much of the city lies in ruins; municipal authorities say bombardment, hunger and privation have killed more than 20,000 residents. Satellite imagery has pinpointed mass graves on Mariupol’s outskirts.

Hundreds were believed entombed when Russia in March bombed a landmark theater in whose basement desperate families had taken shelter, and a Mariupol maternity hospital suffered a hit that sent terrified pregnant women fleeing – at least, those who survived.

Defenders of a sprawling steel factory complex have mounted a desperate last stand, with widespread expectations that Russia would move to wipe out remaining fighters and civilians alike, in order to proclaim the city’s “liberalization” in time for Monday.

Some observers, though, say that in Putin’s Russia, a narrative of conquest could be fashioned out of very little, with horrific conditions in the battle zone presented as proof that Russian troops are fighting bravely to protect the homeland and the Russian speakers of Ukraine.

Analysts say the czarist-era concept of a potemkin village – an artificial construct meant to provide a false but convincing external facade – could carry over to a chronicle of gains purportedly achieved in Ukraine, especially after months of relentless official propaganda about the righteousness of the Russian cause.

“I don’t think they need an actual victory on the 9th of May, just images of combat actions to show to the Russian population,” Oleksandr Musiienko, head of the Center for Military and Legal Studies, told the Ukrainian online outlet NV. Russian forces could, for example, use video of a temporary breach of Ukrainian defenses in a local area to claim a larger conquest, he said.

The eastern front lines are fluid, with some settlements repeatedly changing hands and Russia making little significant progress since the supposed start of its eastern offensive two weeks ago, Western analysts have said.

The shattered ruins of Mariupol could provide a gruesome backdrop to some form of victory parade on Monday, Ukrainian officials say. They have reported that Russian forces are bribing starving locals to set to work clearing away debris from weeks of relentless bombardment.

“Work in exchange for food – that is the best illustration of this ‘victory,'” said Petro Andryushchenko, an advisor to the city’s mayor. Kremlin spokesman Dmitry Peskov said this week they didn’t know if there would be a victory parade in the city.

Ukrainian officials have said an announced troop mobilization by Russia would help it rebuild and reconstitute units shattered by an unsuccessful attempt in March to seize the capital. At the start of the week, the chief of Ukraine’s military intelligence directorate, Kyrylo Budanov, said that such an effort was already in progress and that the holiday would be a pretext for kicking off such a drive.

In a number of localities, including areas that have seen few attacks, municipal officials urged people to stay indoors and avoid large gatherings in the run-up to Monday.

The timing of the warning carried a particular poignancy in a country where many graves have been dug in recent weeks. Under Orthodox Christian tradition, the weeks after Easter, which fell on April 24 this year, are a time to visit the cemetery, often in the company of relatives.

On Monday, Russia is expected to use the occasion to underscore the Kremlin contention that the Ukrainian government is a hapless pawn of the West and that the real battle is occurring between Russia and the entirety of the North Atlantic Treaty Organization. Such a claim could serve as the pretext for prosecuting a war that is “dragging on,” as even a Putin ally, Belarus President Alexander Lukashenko, acknowledged this week in an interview with the Associated Press.

In his expected address, Putin is likely to lean into another familiar – and baseless – theme: likening the war in Ukraine to the Soviet Union’s role in defeating Nazi Germany, the ostensible reason for Monday’s celebrations. The Kremlin spuriously insists that Ukraine is governed by, and overrun by, Nazis. 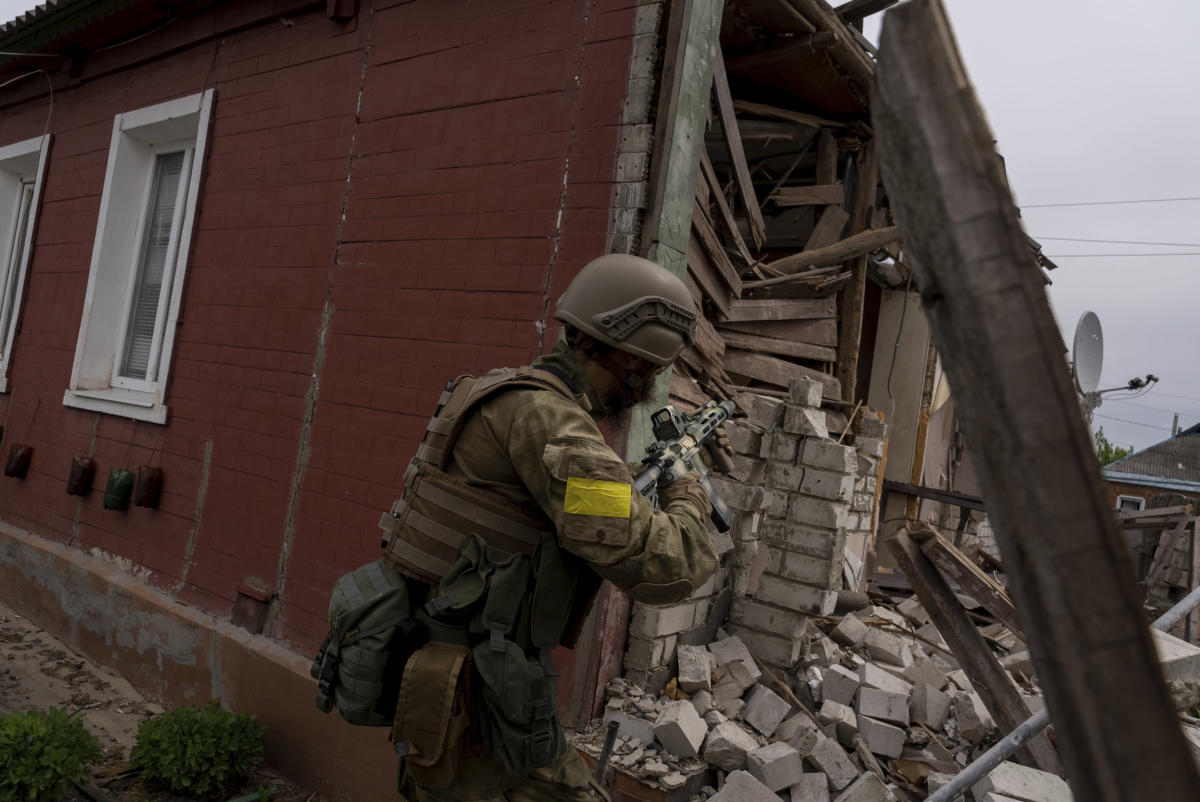 As Eyes Are on Eurovision, Europe Has Another Song Contest