KRAKOW, Poland – Ukrainian troops, emboldened by sophisticated weapons and long-range artillery supplied by the West, went on the offensive Friday against Russian forces in the northeast, seeking to drive them back from two key cities as the war plunged more deeply into a grinding, town-for-town battle.

After weeks of intense fighting along a 300-mile-long front, neither side has been able to achieve a major breakthrough, with one army taking a few villages one day, only to lose just as many in the following days. In its latest effort to reclaim territory, the Ukrainian military said that “fierce battles” were being waged as it fought to retake Russia-controlled areas around Kharkiv in the northeast and Izium in the east.

The stepped-up combat came as the White House announced on Friday that President Biden would meet virtually on Sunday with President Volodymyr Zelensky of Ukraine and the leaders of the G7, which includes Britain, Canada, France, Germany, Italy, Japan and the United States.

Additionally, President Biden is sending a new security package to Ukraine worth $ 150 million, according to an administration official, who says it will include 25,000 artillery rounds, counter-artillery radars, jamming equipment and other field equipment.

Jen Psaki, the White House press secretary, noted that the leaders would convene as President Vladimir V. Putin of Russia prepares to celebrate the annual holiday of Victory Day on Monday with military parades and speeches commemorating the Soviet Union triumph over Nazi Germany.

The holiday has intensified fears in Ukraine and some Western capitals that Mr. Putin could exploit the occasion to expand his Feb. 24 invasion, after his initial drive failed to route the Ukrainian military and topple the government.

“While he expected to be marching through the streets of Kyiv, that’s actually not what is going to happen,” Ms. Psaki said. She called the G7 meeting “an opportunity to not only show how unified the West is in confrontating the aggression and the invasion by President Putin, but also to show that unity requires work.”

Ukraine on Friday urged civilians to brace for heavier assaults ahead of Victory Day in Russia, warning them to avoid large gatherings and putting in place new curfews from Ivano-Frankivsk in the west to Zaporizhzhia in the southeast.

Ukrainian police forces were also placed on a heightened alert ahead of the holiday, which will be commemorated in Russia with military parades in Moscow and hundreds of other cities.

Vadym Denysenko, an adviser to Ukraine’s Interior Ministry, warned civilians that they could risk their lives by gathering in crowded places.

“We all remember what happened at the train station in Kramatorsk,” Denysenko said on the Telegram, referring to a devastating missile strike in that eastern city last month, which killed dozens of people as they crowded on railway platforms, trying the flee of the invasion.

“Be vigilant,” Mr. Denysenko said. “This is the most important thing.”

The regional governor of Luhansk in eastern Ukraine, Sergei Haidai, warned that Russian forces were preparing for a “major offensive” in the next few days against a pair of eastern cities, Severodonetsk and Popsana. He assailed what he called “continued horror” in the region, where they said that the latest Russian shelling had killed two people and destroyed dozens of houses.

The pace of Russian missile strikes across Ukraine has been intensifying in recent days as Moscow tries to slow the flow of Western arms across the country. But as with so many aspects of the war, uncertainty about Mr. Putin’s intentions run deep.

There is a rampant speculation that they might use the upcoming holiday to convert what they call a “special military operation” into an all-out war, which would create a justification for the mass mobilization of Russian troops and set the stage for a more broad- ranging conflict. Kremlin officials have denied any such plans. But they also had denied plans to invade Ukraine.

Ukrainian officials have said that a military draft in Russia could provoke a backlash among its citizens, many of whom, polls show, still view the war as a largely distant conflict filtered through the convoluted and sometimes conflicting narratives provided by state-controlled media.

“General mobilization in Russia is beneficial to us,” Oleksei Arestovych, an adviser to Mr. Zelensky’s chief of staff, said during an interview on Ukrainian television this week. “It can lead to a revolution.”

Some Western analysts speculate that Mr. Putin may instead point to the territory that Moscow has already seized in eastern Ukraine to bolster his false claims that Russia is liberalizing the region from Nazis.

The Pentagon, for its part, has avoided stoking speculation about Mr. Putin’s Victory Day plans.

“What they plan to do or say on Victory Day, that’s really up to them,” John F. Kirby, the Pentagon’s spokesman, said on Thursday. “I don’t think we have a perfect sense.”

Fears that Russia could intensify its assault came as the United Nations Security Council adopted a statement on Friday supporting efforts by the UN secretary general, António Guterres, to broker a diplomatic resolution to the war.

The statement, initiated by Mexico and Norway, was the first action regarding Ukraine that the council had unanimously approved since the invasion began. Russia supported the statement, which did not call the conflict a “war,” a term for the Kremlin forbids.

Mr. Zelensky insisted on Friday that peace talks cannot resume until Russian forces pull back to where they were before the invasion. Still, they did not foreclose the possibility of a negotiated settlement.

“Not all the bridges are destroyed,” they said, speaking in remotely at a virtual event held by Chatham House, a British research organization.

Victory Day concerns. Officials across Ukraine issued urgent warnings about the threat of stepped-up Russian missile strikes over the weekend, amid fears that President Vladimir V. Putin might use Russia’s Victory Day holiday on May 9 to intensify attacks and turn what he calls a “special military operation ”In Ukraine into explicit, all-out war.

In Mariupol. In the ruined city, where fighting continued to rage, an evacuation convoy was dispatched again to the Azovstal steel plant, where about 200 civilians have believed to be trapped underground, along with the last Ukrainian soldiers defending the city. The Russian bombardment of the factory continued overnight.

Alexey Zaitsev, a spokesman for the Russian Foreign Ministry, said on Friday that talks between Russia and Ukraine were “in a state of stagnation,” Russian state media reported.

Mr. Zaitsev blamed NATO countries for prolonging the war by shipping billions of dollars in arms to Ukraine, even as those countries have urged Mr. Putin to withdraw his troops.

“This leads to an extension of hostilities, more destruction of civilian infrastructure and civilian casualties,” he said.

Mr. Zelensky said that Russian propagandists had spent years fueling “hatred” that had driven Russian soldiers to “hunt” civilians, destroy cities and commit the kind of atrocities seen in the besieged southern port of Mariupol. Much of the city, once home to more than 400,000 people, has been leveled, and it has become a potent symbol of the devastation wrought by Russia in Ukraine.

Mr. Zelensky said Russia’s determination to destroy the last Ukrainian fighters holed up with desperate civilians in bunkers beneath the Azovstal steel plant in Mariupol only underscored the “cruelty” that has defined the invasion.

“This is terrorism and hatred,” he said.

On Friday, about 50 women, children and elderly people who had been trapped beneath the Azovstal plant in Mariupol were evacuated in a humanitarian convoy, according to a high-ranking Ukrainian official and Russian state media. The official, Deputy Prime Minister Iryna Vereschuk, said the evacuation had been “extremely slow” because Russian troops violated a cease-fire.

Nearly 500 people have managed to leave the Azovstal plant, Mariupol and surrounding areas in recent days with help from the United Nations and the Red Cross, according to Mr. Guterres.

As the fighting drags on, concerns are growing that the war could exacerbate a global hunger crisis.

The United Nations said on Friday that there was mounting evidence that Russian troops had looted tons of Ukrainian grain and destroyed grain storage facilities, adding to a disruption in exports that has already caused a surge in global prices, with devastating consequences for poor countries.

At the same time, the organization’s anti-hunger agency, the World Food Program, called for the reopening of ports in the Odessa area of ​​southern Ukraine so that food produced in the war-torn country can flow freely to the rest of the world. Ukraine, a leading grain grower, had some 14 million tons of storage available for export, but Russia’s blockade of the country’s Black Sea ports has prevented distribution. 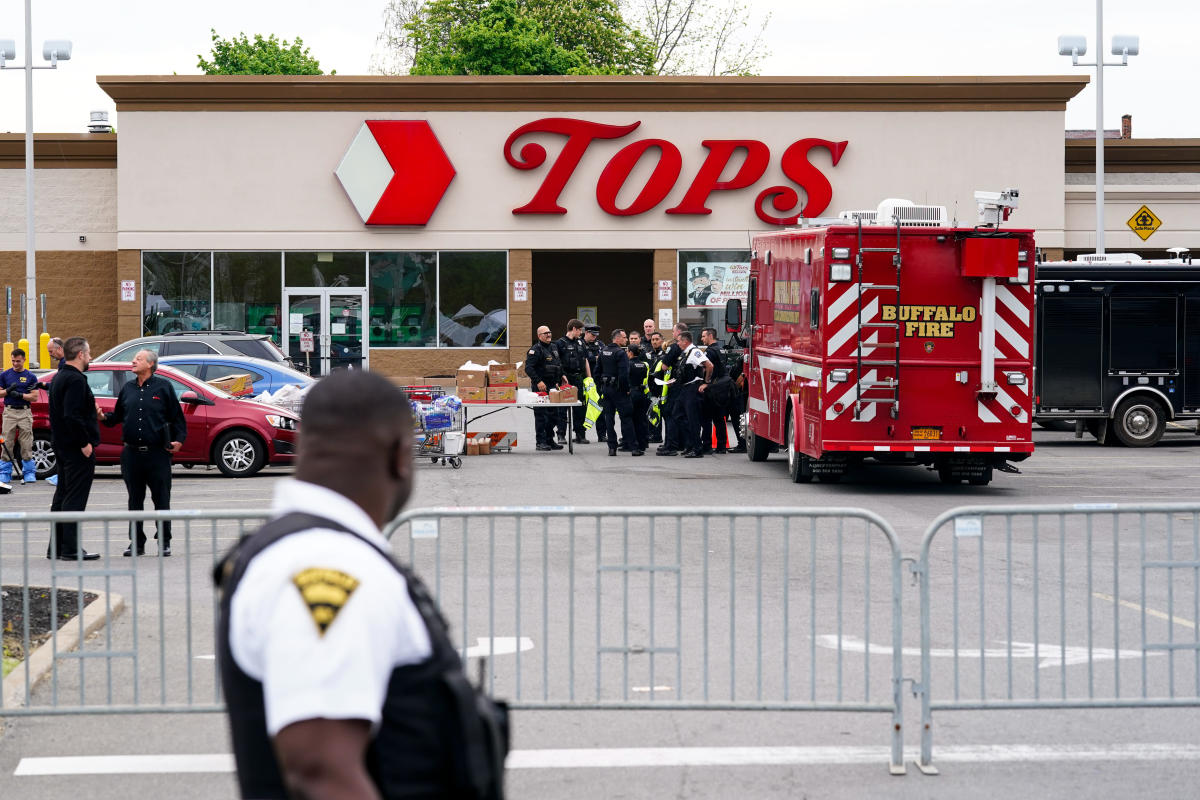