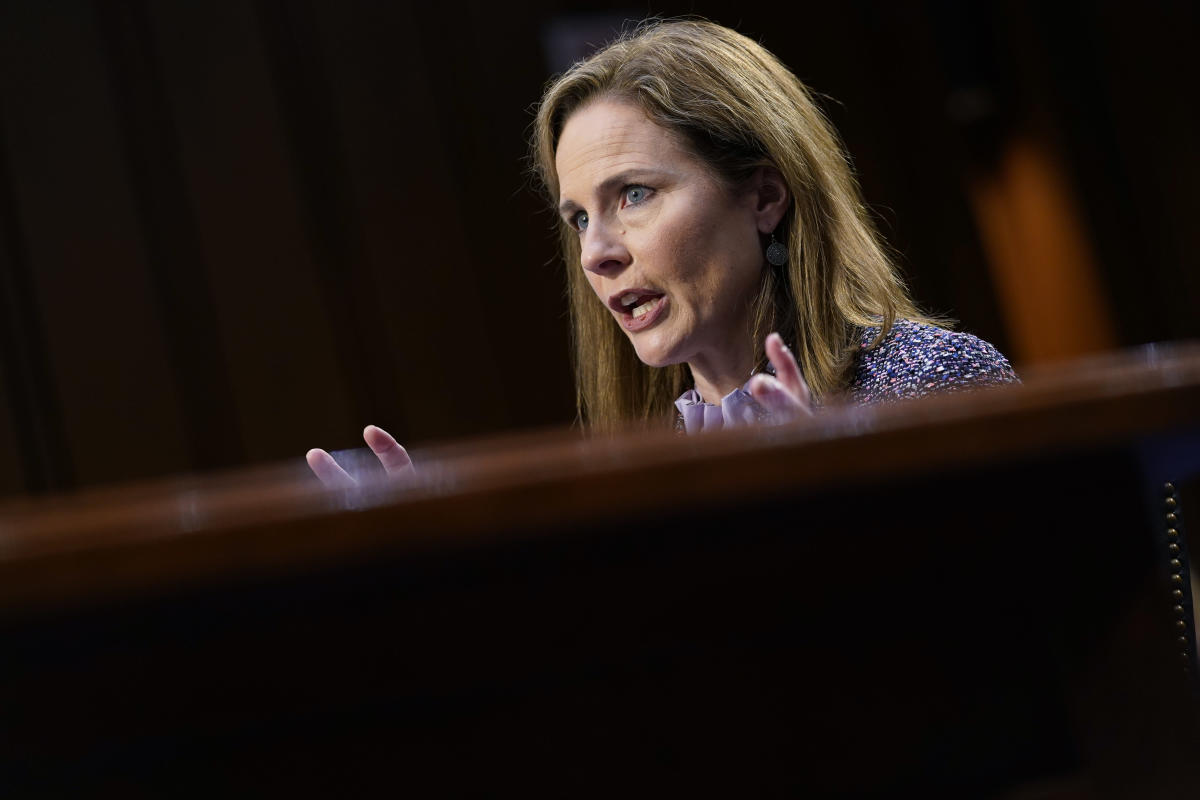 WASHINGTON (AP) – In one form or another, every Supreme Court nominee is asked during Senate hearings about his or her views of the Roe v. Wade abortion rights ruling that has stood for a half century.

Now, a draft opinion obtained by Politico suggests that a majority of the court is prepared to strike down the landmark 1973 decision, leaving it to the states to determine a woman’s ability to get an abortion.

A look at how the Republican-nominated justice, now a 6-3 majority, responded when asked by members of the Senate Judiciary Committee for their views on the case:

Sen. Dianne Feinstein of California, then the top Democrat on the committee, asked Barrett: “So the question comes, what happens? Will this justice support a law that has substantial precedent now? Would you commit yourself to whether you would or wouldn’t? ”

“Senator, what I will commit is that I will obey all the rules of stare decisis,” Barrett replied, referring to the doctrine of the courts giving weight to precedent when making their decisions.

Barrett went on to say that she would do that for “any issue that comes up, abortion or anything else. I’ll follow the law. “

Sen. Amy Klobuchar, D-Minn., Asked Barrett whether she viewed Roe v. Wade as a “super precedent.” Barrett replied that the way the term is used in “scholarship” and the way she had used it in an article was to define cases so well settled that people don’t seriously push for its overruling.

“And I’m answering a lot of questions about Roe, which I think indicates that Roe doesn’t fall in that category,” Barrett said.

BRETT KAVANAUGH, 2018: It was Feinstein who also asked Kavanaugh, “What would you say your position today is on a woman’s right to choose?”

“As a judge, it is an important precedent of the Supreme Court. By ‘it,’ I mean Roe v. Wade and Planned Parenthood v. Casey. They have been reaffirmed many times. Casey is a precedent, which in itself is an important factor to remember, “Kavanaugh said.

Casey was a 1992 decision that reaffirmed a constitutional right to abortion services.

Kavanaugh went on to say that they understood the significance of the issue. “I always try and I do hear the real world effects of that decision, as I try to do, of all the decisions of my court and of the Supreme Court.”

With President Donald Trump’s first Supreme Court nomination, it was Sen. Charles Grassley. R-Iowa, who asked point-blank: “Can you tell me whether Roe was decided correctly?

The late Sen. Arlen Specter, R-Pa., Asked of the now-chief justice, who was a federal appeals court judge when nominated: Roe is the settled law of the land. ‘ Do you mean settled for you, settled only for your capacity as a circuit judge, or settled beyond that? “

Specter, who was unabashedly supportive of Roe v. Wade, observed during Alito’s hearings that the “dominant issue” was the “widespread concern” about Alito’s position on a woman’s right to choose. The issue arose because of a 1985 statement by Alito that the Constitution does not provide for the right to an abortion, Specter declared.

“Do you agree with that statement today, Judge Alito?” Specter asked.

“Well, that was a correct statement of what I thought in 1985 from my vantage point in 1985, and that was as a line attorney in the Department of Justice in the Reagan administration.

“So you would approach it with an open mind notwithstanding your 1985 statement?” Specter asked.

“Absolutely, senator. That was a statement that I made at a prior period of time when I was performing a different role, and as I said yesterday, when someone becomes a judge, you really have to put aside the things that you did as a lawyer at prior points in your legal career and think about legal issues the way a judge thinks about legal issues. “

Alito was the author of the leaked draft opinion, which declares the ruling in Roe v. Wade was “egregiously wrong from the start.”

The late Sen. Howard Metzenbaum, of D-Ohio, recalled chairing a committee hearing and listening to women maimed by “back-alley abortionists.” They said he was “terrified if we turn back the clock on legal abortion services.”

In a questioning Thomas the senator said: “I want to ask you once again, of appealing to your sense of compassion, whether or not you believe the Constitution protects a woman’s right to an abortion?”

Thomas replied: “I guess as a kid we heard the hushed whispers about illegal abortions and individuals performing them in less than safe environments, but they were whispers. It would, of course, if a woman is subjected to the agony of an environment like that, on a personal level, certainly, I am very, very pained by that. I think any of us would be. “

Thomas declined though to give his opinion “on the issue, the question that you asked me.”

“I think it would undermine my ability to sit in an impartial way on an important case like that,” they said.